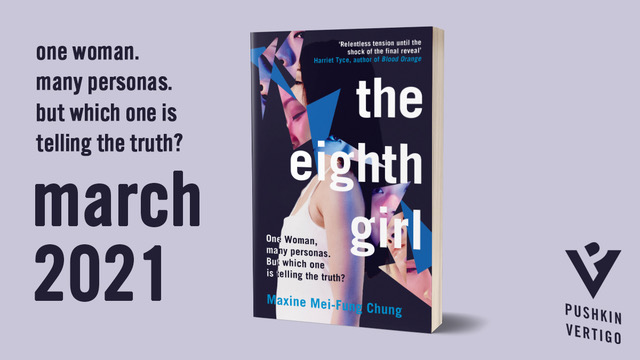 Maxine Mei-Fung Chung is a psychoanalytic psychotherapist, clinical supervisor and training psychotherapist. She lectures on trauma, gender and sexuality, clinical dissociation and attachment theory at the Bowlby Centre and was awarded the Jafar Kareem Bursary for her work supporting people from ethnic minorities experiencing isolation and mental health problems.

Next year, Pushkin Vertigo publish Maxine’s debut novel, The Eighth Girl, an unsettling, seductive psychological thriller about a young woman with multiple personalities who is drawn into London’s dangerous underworld. As both a clinician and a writer, Maxine sat down with her editor Harriet to talk race, misogyny and stigma in the world of psychology and crime writing.

Harriet: Tell me how your experience as a psychoanalytic psychotherapist fed into your novel, particularly in regards to your character Alexa, who has Dissociative Identity Disorder.

Maxine: There is still so much research and learning needed in regard to trauma and dissociation. Having worked as a psychotherapist for fifteen years, I realized my experience had been something quite different to what is portrayed in our culture regarding Dissociative Identity Disorder. I wanted to draw on my understanding so far and offer readers the opportunity to think about dissociation for themselves. Writing a story about the fracturing weights young women are continually forced to carry, particularly those who have survived early trauma I hoped would open up conversation regarding the stigmatisation of mental illness.

In writing The Eighth Girl I was also aware of how, in patriarchal terms, language and representation is restricted to writing about women and not for them. I thought about leaning into this void and so set out to create a protagonist who was not only living with DID but who was also a heroine. It felt important that I move away from the usual tired, lunatic trope that entertainment culture has produced to date. I wanted to create a character who, whilst living with mental illness, was still able to function on a day-to-day basis holding down full time work, experiencing relationships and also had rich and varied interests. Every day I’m full of admiration for my patients, kind and fierce, who make a choice to show up and win, regardless of their struggles.

Harriet: You have spoken before about being wary of many of the portrayals in the media of mental illness. How did that motivate you when writing The Eighth Girl?

Maxine: As a psychotherapist and now a writer, I’m perhaps more than a little vigilant of the culture—the portrayal of mental illness and personality disorders in literature, TV shows and movies, and the conflicting forces of entertainment versus a better understanding of the human condition and whether the twain shall meet? I felt motivated to steer away from exploitative tropes and attempted to create a heroine whom readers could feel compassion towards, and possibly even curious about. A young woman we could champion.

Harriet: The relationship and power dynamics between psychiatrist and patient is an emotionally complex one, demonstrated here between Daniel and Alexa. Can you say more about this?

Maxine: Sure. Something I was keen to explore was how one’s inner life and past life experiences shape our behaviours and the way we relate to others, and how we as psychotherapists can only take our patients as far as we’ve gone ourselves—in terms of self reflection.  I’ve always felt that therapy is a two-way conversation. I wanted to challenge the stereotyped portrait of the remote, passive psychotherapist and also create a story where we experience the internal workings from both patient and psychiatrist. I wanted to create a story where we witness the workings from both sides of the room. Whilst writing The Eighth Girl I embarked on the idea of ‘lingering shock’, and having both Daniel and Alexa as unreliable narrators offered a great vehicle for this!

Harriet: How important was it to you to cover themes of racism and misogyny?

Maxine: It was incredibly important for me as a WOC, and also as a practicing psychotherapist and writer and having been a patient myself (all psychotherapists have to be in analysis for a considerable amount of time!) who has experienced both misogyny and racism. But also because these crimes are relentless and we need to use whatever tools and resources and platforms we have to keep the pressure on, to address and readdress in whatever form possible be it activism, art or in the case of The Eighth Girl – writing a novel.

Harriet: Freud is still often cited in psychotherapy – do you think this needs an update?

Maxine: For sure. Maybe it’s time to change Freud’s current position as the analytic vanguard. I’d like to propose the mighty Karen Horney—just to get the party started—whose Neo-Freudianism and theory of ‘womb-envy’ opposed Freud’s penis winning hands down every time!  There are of course other psychoanalysts we might refer to such as Jung, Winnicott and Klein, or more contemporary clinicians like Mitchell, Van Der Kolk, Van Der Hart and Messler-Davies, but none are as prominent in the cultural discourse as Freud.  Perhaps this is because he was a white man born into privilege. Perhaps not surprisingly, though frustratingly, Freud is still sourced heavily in academia and psychoanalytical trainings. Oedipus Complex, Penis Envy, and the Ego are still banded about at dinner parties as lazy shorthand for emotional complexities, inequality and fragile identities—lacking psychoanalytical rigour. It is well documented that psychoanalysts and disciples who dared challenge Freud’s ideas were quickly jettisoned out of the movement—Freud’s chronic narcissism wasn’t up to healthy scrutiny. If you were a female psychoanalyst you will have been greeted with these choice words: “Women oppose change, receive passively, and add nothing of their own.” A century of patriarchal conditioning, it seems, is hard to unlearn.

Harriet: You must be thrilled to have The Eighth Girl optioned for Netflix. Can you tell us who your ideal Alexa would be?

Maxine: I love this question for so many reasons, but mostly because we are experiencing so many amazing Asian actresses gliding on our screens right now. When I was told that Aggregate (Jason Bateman and Michael Costigan) had optioned The Eighth Girl I discussed with Michael who would ideally play Alexa. “Gemma Chan or Constance Wu” I replied instantly, “and look, we’re even half way there with the name!”

The Eighth Girl by Maxine Mei-Fung Chung is out in March 2021.

Previous post
CrimeReads: How Pop Culture Got It Wrong With Dissociative Identity Disorder